Kayla Schutes (left), Shannon Stevens and Erik Stevens have been rafting most weekends this summer in the Chilkat Valley (Photo courtesy of Erik Stevens)

A Coast Guard helicopter crew rescued three paddlers from Haines along the Tsirku River east of Klukwan on Sunday. As KHNS’s Corinne Smith reports, dry suits and a satellite phone may have made the difference between life and death.

It was supposed to be a nice three day rafting weekend. The trio had been transported by helicopter to explore the Tsirku Glacier near the Canadian border.

â€œThen we had a long, long float, (over) most of the Tsirku River,â€ said Erik Stevens. â€œAnd the vast majority were really perfect – spectacular scenery and the river was beautiful. It was clean. . We were having a great time. “

But on the third day of the trip, just as they were at the end, that’s when things started to fall apart.

â€œI mean we were less than a minute to get to the car. At river speed we would have gotten to the car in a minute if we hadn’t run into any issues there, â€Stevens said.

Stevens was in a raft for one man. His sister Shannon and his girlfriend Kayla Schutes were in inflatable kayaks. As they neared the end of the Little Salmon River there was a blind spot, but he said he had walked that part of the river before.

â€œI probably should have come out across the river and really take care to spot that blind turn, but I was too complacent, I didn’t. So we floated around the corner and were really surprised to find that a very very strong and very fast current from the Tsirku was coming towards us sideways and pushing straight into some cliffs and making a big whirlpool and a big rapid there Stevens said. .

He crossed the rapids. But her sister rocked. Schutes tried to help her but was then sucked into a colander – it’s a fallen tree and that kind of river danger can be fatal. Within moments, the two women rushed towards the cliffs and surfaced about 100 feet apart. Stevens reached a sandbar across the river.

â€œAt this point, Shannon was screaming. And I thought she was drowning. It looked like she was drowning or about to be sucked under a log. So I was just running, not because I was dragging a 60 pound boat upstream. I was going as fast as I could to try to come up and see if I could help, â€Stevens said. 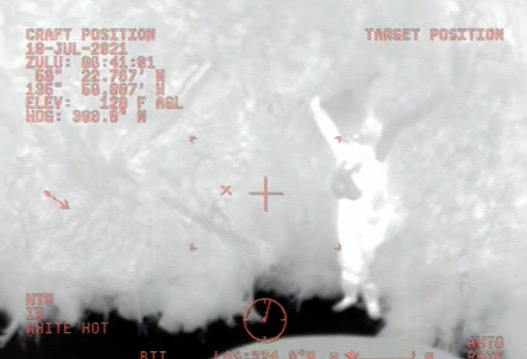 A screenshot from Coast Guard video shows Kayla Schutes where she is stranded, standing at the cliffs (Photo courtesy of the US Coast Guard)

The two women could not see each other. Stevens yelled through, and through the roar of the rapids, was able to scream and let them know that they were both alive.

Schutes lost his paddle so it was almost impossible to maneuver his kayak. Shannan Stevens’ kayak got stuck upside down in the jam and was battered by the current that washed most of their gear downstream.

Fortunately, they had a satellite phone. Stevens says they called friends for help but didn’t get a response and it was getting late. So he called SOS.

Stevens said he hoped it would work. “It really seemed like a situation to me where I couldn’t see how they could get the helicopter in there and get them.”

A Sitka-based Coast Guard crew arrived around 10:30 p.m.. in an MH-60 Jayhawk helicopter. A lifeguard swimmer first took Stevens to safety. But getting the two women turned out to be more difficult.

“The helicopter is trying to get close enough to the shore, but there are steep overhanging trees, and there is a dead fall, and the rotor wash is so hard that it knocked over pieces of trees,” there were dead branches falling all around the girls. I mean, it was very very dangerous, very chaotic “

The rescuer later told the group that he was in the river and had to swim to the shore across the river. Stevens said he described climbing the bank, “he said he was just praying that there was solid earth there because everything was falling apart.”

The three were transported to Haines Airport where friends were waiting, and although cold and shaken, they were not injured.

“It was just a huge relief.”

Stevens says they were lucky and were well prepared, all wearing drysuits and helmets. He said the biggest lesson was to have a satellite phone with you, not just in a boat that could be washed away.

While the Little Salmon River may have been a familiar and easy float in recent years, he urges everyone to avoid it right now due to the currents at the confluence with the Tsirku River.

â€œThe rest of the Tsirku are probably fine,â€ Stevens said. “You know, if you got to this place from the main Tsirku, you would probably go around it without even noticing it.” But it comes from Petit Salon, that’s the problem.

The three hope to recover their camping gear and three boats, and ask anyone who might see something washing up ashore to make contact. But Stevens says it will be some time before he gets back on the water. 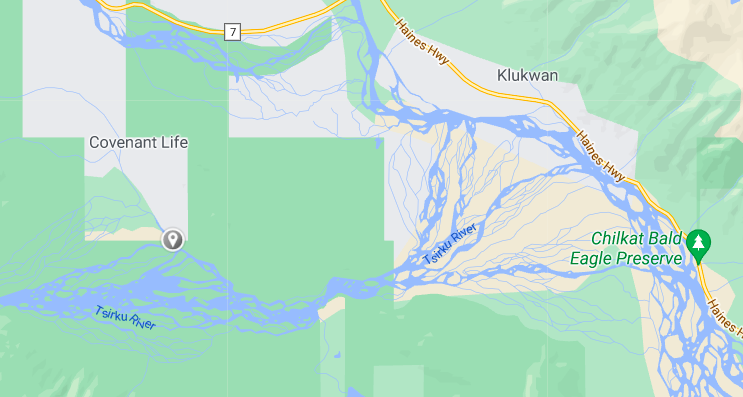