HEART OF ALENE – Earl Carroll’s apartment has an American flag hanging above the stairs.

Photos and plaques are displayed, offering insight into his 22-year career in the Coast Guard.

He wears a blue hat that has â€œWWII Veteranâ€ written on it in bright yellow letters with a pin and badges honoring his service.

And finally, his shirt says “American Grandpa and proud of it!” with the letters spelling out grandfather in red, white and blue.

“I’m quite a patriot,” he said, with a small smile as he walked around the room.

Carroll is 98 years old. The longtime Coeur d’Alene man hits a smooth putt and watches the ball roll across the mat. He walks a visitor up the long staircase to the front door. He hears, speaks well and sees well.

And there is always a sparkle in his eyes.

He is surprised when it is pointed out to him that he defies his age.

“I’m only 98 years old,” he says without suggesting he’s joking.

Carroll doesn’t go out often, but when he does he wears this WWII cap. He loves when people, especially children, thank him for his service.

Today he will celebrate Veterans Day with lunch at Hudson’s Hamburgers. He hopes people will attend one of the Veterans Day services in the area.

Then, after a while, he adds, â€œBut it’s not in the minds of people today. They have a life to live and worry about themselves.

Carroll was not worried about him when he joined the Coast Guard on October 15, 1941, during World War II.

But he remembered that he worked hard and was dedicated to whatever task was given to him.

â€œOnce you got to grips with the different tasks, you were fine,â€ he said.

During the war, he was stationed in Alaska and served on the USCGC Onondaga, a cutter, on general patrol.

After the war he was chief aviation engineer and worked on helicopters and fixed-wing aircraft.

His periods of service have taken him to stations in Port Angeles, Washington; San-Francisco; Oahu, Hawaii; St. Petersburg, Florida; and Salem, Mass.

When he retired in 1964 at his wife’s request, he was ranked Top Chief in the US Coast Guard. He was given a golden braid worn around the sleeve of his uniform coat, which meant he wore a rating of 4.0, the highest he could receive, throughout his career.

Carroll is proud to note that he has been asked not to retire, and officers have even dissuaded him once.

If he had stayed, he would have been the first Master Chief, which he regrets not having done.

â€œI would have a much better retirement now,â€ he said, shaking his head.

But he knows he’s had a good life.

Today, Carroll enjoys being with a family that includes several grandchildren. He is relaxed and happy.

He looks back on his career in the Coast Guard with pride.

“I gave them everything they asked for,” he said. 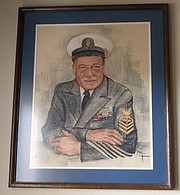 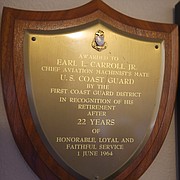