(The captain of the riverboat is a storyteller, and captain Don Sanders shares the stories of his long association with the river – from discovery to a way of love and life.

Winters seemed longer and more brutal when I was a teenager working my supper at Walt’s Boat Harbor on the Ohio River below West Second Street in Covington, my Kentucky hometown. But no matter how intense and prolonged those winter months seemed, there was that particular moment when the southerly winds carried the promise of warmer days to come. Hopefully we’ve crossed that line with the departure of Old Man Winter for climes closer to its northern quarter.

Winters seemed longer and more brutal when I was a teenager working my supper at Walt’s Boat Harbor.

What a difference it is not to have a boat. Whether it’s one under me for the owners of the DELTA QUEEN or GRAND VICTORIA II, or my smaller, personal version of a riverboat like the SUN*FISH and Rafter CLYDE, I feel incomplete without a bridge under my feet. Either way, the milder season ahead always meant the start of planning for painting and upgrading these boats.

Essentially, the work remained the same, the most significant difference being the size scale of the vessels in question. Compared to the GRAND VIC, the CLYDE was like a tick on a Great Dane.

Every five years, federal law requires that passenger-carrying boats certified to operate in fresh water be inspected out of the water. Prior to returning to service, all corrections must have US Coast Guard approval prior to re-certification.

An exception to leaving the water has been granted to casino boats. Had they not been exempted, all gambling operations would have ceased for up to two weeks, possibly longer, while the boats were in transit to and from a shipyard. A long inspection between trips would take another three to five days, maybe a week. So instead, government inspectors granted game boats an underwater ultrasonic inspection of the hull instead of a visual glimpse of the ship out of its natural element. 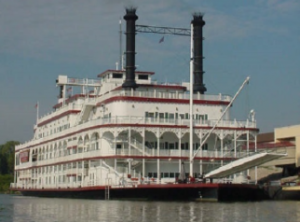 Compared to the GRAND VIC, the CLYDE was like a tick on a Great Dane.

Inspection time has always been nice for me, especially when the boat was “on the hard” out of the water. Maybe that’s why I chose the nickname ‘Shipyard Sam’ when I needed a pen name to post on a river-related website using the computer of the undertaken during service hours in the wheelhouse of the GRAND VICTORIA II.

Looking forward, I encountered my first “bottom job” on a river boat while helping Walter Hoffmeier clean, “plug” and paint the underside of the PAL-O-MINE hull while underway, around the spring of 1953 or ’54, at Helen’s Newport Yacht Club. Smelling the tarmac and red lead paint on the lower planks of the PAL was the first time I realized I had found my natural element working on a boat. I was 11 or 12, depending on which spring found me crawling under the cypress wood hull.

Child’s play didn’t exist around Walter, where a boy had to grow up fast and learn to do a man’s job if he wanted to stay. But, I quickly learned to love every minute spent with the old riverman.

Born in a canoe on the Licking River, Walt was willing to teach if the student expressed a desire to learn. Every day was a delight, and I did my best to earn and keep a front row seat in Walter’s class by the river. 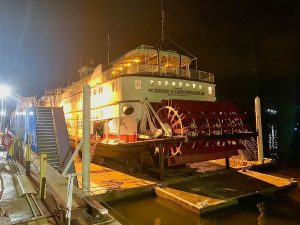 Every five years, federal law requires that passenger-carrying boats certified to operate in fresh water be inspected out of the water. (Photo by Nick Lukaszewski)

Speaking of a classroom – the “Ernest E. Wagner School of Steam Navigation” was what Captain Frederick Way, Jr. called the time that I and other privileged young people spent under the tutelage of the guiding hand Cap’n Wagner. “Big Cap,” as many of his former stunt doubles fondly remembered, was a born leader and teacher.

Cap’s style of steamboat mastery came from the men who guided him after he unexpectedly arrived at the public landing stage in Cincinnati on his way to Akron, Ohio, from Johnson City, Tennessee, to join his brother. in a tire factory during the Great Depression. Wagner’s incredible size and easy temper quickly earned him a position of trust and responsibility on the steamships owned by Cincinnati’s Coney Island amusement park. What Big Cap picked up from experienced boatmen, he quickly expanded that knowledge and then passed on that wisdom to those of us who had the privilege of working under his command.

Fortunately, as a 17-year-old deckhand aboard the Steamer AVALON, captained by Wagner, I brought the experience I learned from Walter and a gifted work ethic from my parents and grandparents back in the days of the great Depression. As a result, it wasn’t long before Big Cap realized he had a “Kentucky mule” ready, willing and able to perform some demanding steamboat duties in the style and manner he had need. 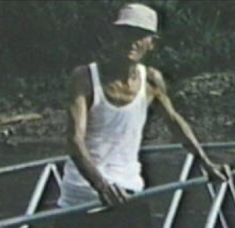 Child’s play didn’t exist around Walter, where a boy had to grow up fast and learn to do a man’s job if he wanted to stay.

Perhaps some of my fondest memories of Captain Wagner date back to the three days of late winter and early spring we spent together aboard the DELTA QUEEN at the Dixie Machine Welding & Metal Works shipyards in the New Orleans in 1970 and the Avondale shipyard above the Crescent. City, in 1971 and 1972. In the second season I was first mate of the QUEEN, and in the third trip to the shipyard I was acting captain to Captain Wagner on what was then possibly the ship most famous steam engine in the world.

Taking full advantage of what I had gleaned from Big Cap and using that knowledge for the best use of the ship, gave Cap’n Wagner the propensity to dive into pet projects he always wanted to accomplish but couldn’t. never had time to do. Among these chores:

1 The grand piano in the Orleans room has been stripped of its ebony color and refinished in the natural mahogany luster under the dark coloring. 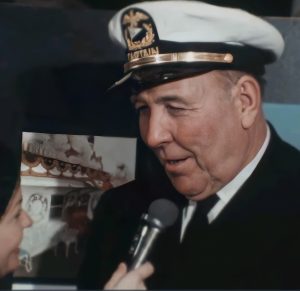 “Big Cap,” as many of his former stunt doubles fondly remembered, was a born leader and teacher.

2 Teak handrails on the outside decks, it changed from cheesy teal green to natural teak.

3 The bronze filigree on the grand staircase from the forward cabin saloon to the Texas saloon has lost the appalling black paint hiding the hue of the natural, reddish ornamental ironwork.

The approach of spring always sparks primitive riverine urges to get out the paint buckets and brushes, the caulking guns, the saws, the grinders and the drills. But as strong as the impulse may be, I must remember that these cries are for the younger generations; that I’m retired and don’t have a boat of my own. Also, my 95 year old house has been abandoned since I found the SUN*FISH and the CLYDE. So it’s time to look away from the water and focus on what needs to be done the most, on land.

Some of my fondest memories of Captain Wagner date back to the three days of late winter and early spring we spent together aboard the DELTA QUEEN in the shipyard. (Historical photos)

Captain Don Sanders is a river man. He was a riverboat captain with the Delta Queen Steamboat Company and with Rising Star Casino. He learned to fly an airplane before learning to drive a “machine” and became a captain in the USAF. He is an adventurer, a historian and a storyteller. Now he is a columnist for the NKyTribune and will share his stories of growing up in Covington and his stories from the river. Hang on for the ride – the river has never looked so good.