On the morning of September 23, the Vietnamese Head of State had working sessions with representatives of the permanent members of the United Nations Security Council (UNSC).

During his meeting with the Chinese delegation, Phuc said that a stable and healthy relationship between Vietnam and China is an important factor for the development of each country and contributes to peace, cooperation and development in the region. and in the world in general.

As neighbors, Vietnam and China should step up cooperation to ensure the security of water resources, deal with climate change and promote green development, he suggested.

Meeting with Russian officials, Phuc stressed that Russia is an important partner of Vietnam, adding that he affirmed this fact during his online talks with President Vladimir Putin last week.

He said the leaders of the two countries will soon hold face-to-face meetings to strengthen the bilateral strategic partnership.

Blinken reaffirmed President Joe Biden’s latest pledge to donate an additional 500 million doses of COVID-19 vaccine to other countries at the COVID-19 Global Summit that President Phuc attended on September 22.

Phuc said Vietnam continues to regard the United States as a major and important partner, with economic, trade and investment cooperation being the main pillar of bilateral relations.

In this spirit, he suggested that the two countries continue the exchange of high-level delegations, create more favorable conditions for large American groups, especially high-tech groups, to increase their presence in Vietnam, while ensuring a stable development of exchanges towards a balance trade links.

He praised Leahy and the US Congress for their efforts to urge the US administration to help Vietnam with vaccines and medical supplies, and suggested the senator further promote cooperation between the two countries in this regard.

Phuc also thanked the senator for his contributions to dealing with the consequences of the war, including the dioxin clean-up projects at Da Nang and Bien Hoa airports, and invited him to visit Vietnam when possible.

For her part, Leahy pledged that he would continue to support Vietnam in dealing with the consequences of the war, including assisting victims of the war and Agent Orange / dioxin.

On September 22, the President met Queen Maxima of the Netherlands, Special Advocate of the United Nations Secretary General for Inclusive Finance for Development (UNSGSA), during which he thanked the Queen for her support to Vietnam, especially in promoting the inclusion of finance. 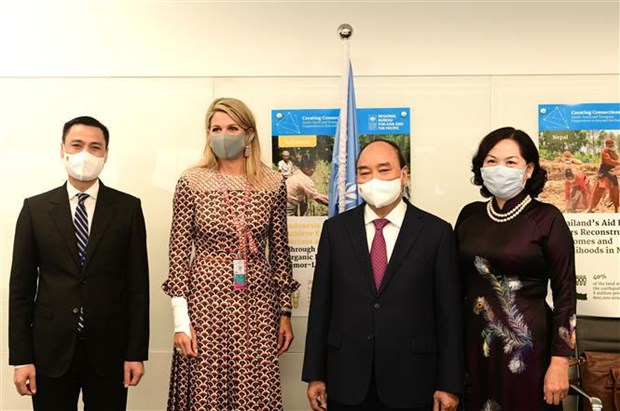 On September 22, the President met Queen Maxima of the Netherlands, Special Advocate of the UN Secretary General for Inclusive Finance for Development (UNSGSA). (Photo: VNA)

They also shared their joy at the strong growth of Vietnam-Netherlands relations over the years. The Netherlands is now Vietnam’s second largest trading partner and the largest investor in the EU.

They agreed that the two sides should maintain high-level meetings and exchanges between ministries and local governments in order to better harness the potential of both countries and remain the other’s primary partner in Southeast Asia and in the EU.

Phuc highly appreciated the active contribution of the Netherlands to the COVAX facility for sharing COVID-19 vaccines as well as his donation of medical supplies to Vietnam. 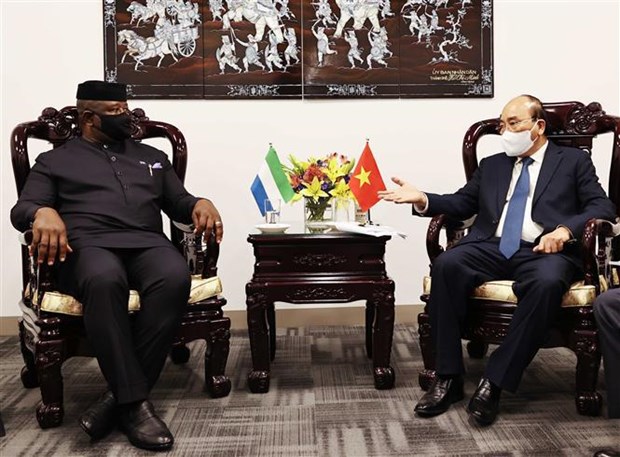 Meeting his Sierra Leonean counterpart, Julius Maada Bio, the Vietnamese leader suggested that the two countries step up bilateral meetings and exchanges both in person and by videoconference.

Each side is expected to appoint an honorary consul who will serve as a bridge to strengthen the multi-faceted ties between the two nations as they have yet to open an embassy in the other’s capital, Phuc proposed, adding that the two countries should provide a legal framework for strengthening bilateral cooperation through the early conclusion of negotiations and the signing of several agreements concerning the protection and facilitation of investments, and the avoidance of double taxation.

President Phuc further said Vietnam was ready to share its experience and step up cooperation with Sierra Leone in agriculture, as proposed by President Julius Maada Bio. 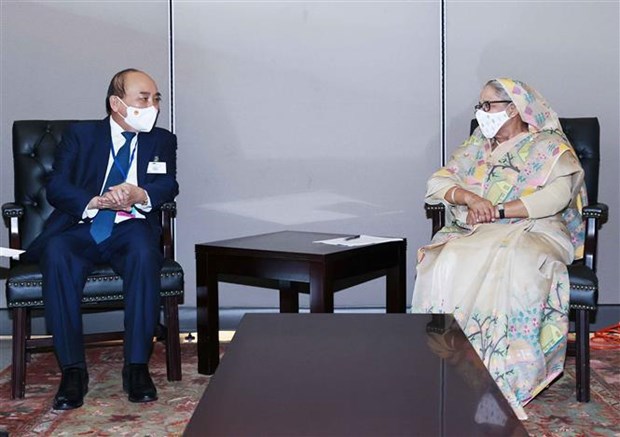 During the meeting with Bangladeshi Prime Minister Sheik Hasina, President Phuc spoke highly of the development of the long-standing and multifaceted partnership of the two countries. (Photo: VNA)

During the meeting with Bangladeshi Prime Minister Sheik Hasina, President Phuc spoke highly of the development of the long-standing and multifaceted partnership of the two countries, saying he wanted the bilateral relations to develop further in the times to come.

The two leaders welcomed seeing the growing trade between Vietnam and Bangladesh despite the impacts of COVID-19 and agreed that the two sides should maintain their existing cooperation mechanisms, such as the Vietnam-Bangladesh Joint Commission and their committee. joint on trade, soon to raise two-way trade to 2 billion USD.

Vietnam wants to invest in Bangladesh in the areas of agriculture and fishing, industry and crafts, culture, education and training, tourism, textiles and clothing, said the Vietnamese president, asking the Bangladeshi side to offer Vietnamese investors wider access to these areas. .

During a meeting with the Managing Director of the International Monetary Fund (IMF) Kristalina Georgieva, the Vietnamese president praised the IMF’s cooperation with Vietnam in socio-economic development and international integration.

He also thanked the fund for partnering with Vietnam to deal with the COVID-19 pandemic.

President Phuc appreciated that the IMF has worked with the World Bank, the World Health Organization and the World Trade Organization to establish a special working group on COVID-19 vaccines, with the aim of promoting delivery of vaccines and medical equipment to developing countries.

He expressed the hope that the IMF will support Vietnam in access to vaccines and continue to stand by the country in its development towards the goal of becoming a developing country with a modern industry and a higher average income. ‘by 2030; and a developed, high-income nation by 2045, as the resolution of the 13th National Party Congress aims.

For her part, the Managing Director of the IMF praised Vietnam for its economic achievements in the recent past and the much appreciated policies of the Vietnamese government to stabilize the macro-economy and renew growth models.

She said the IMF will help Vietnam overcome the difficulties triggered by the ongoing pandemic and support the country’s development./.